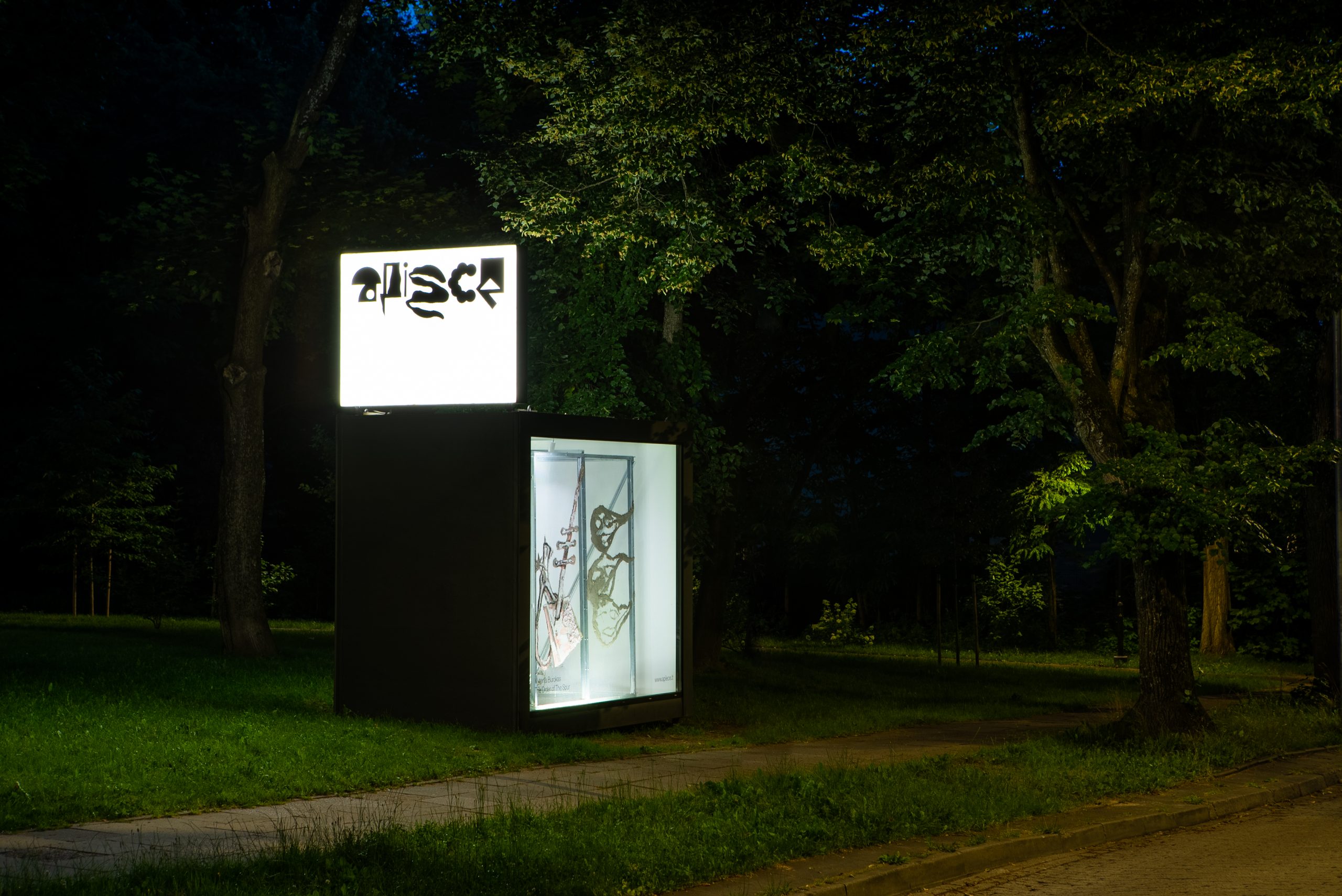 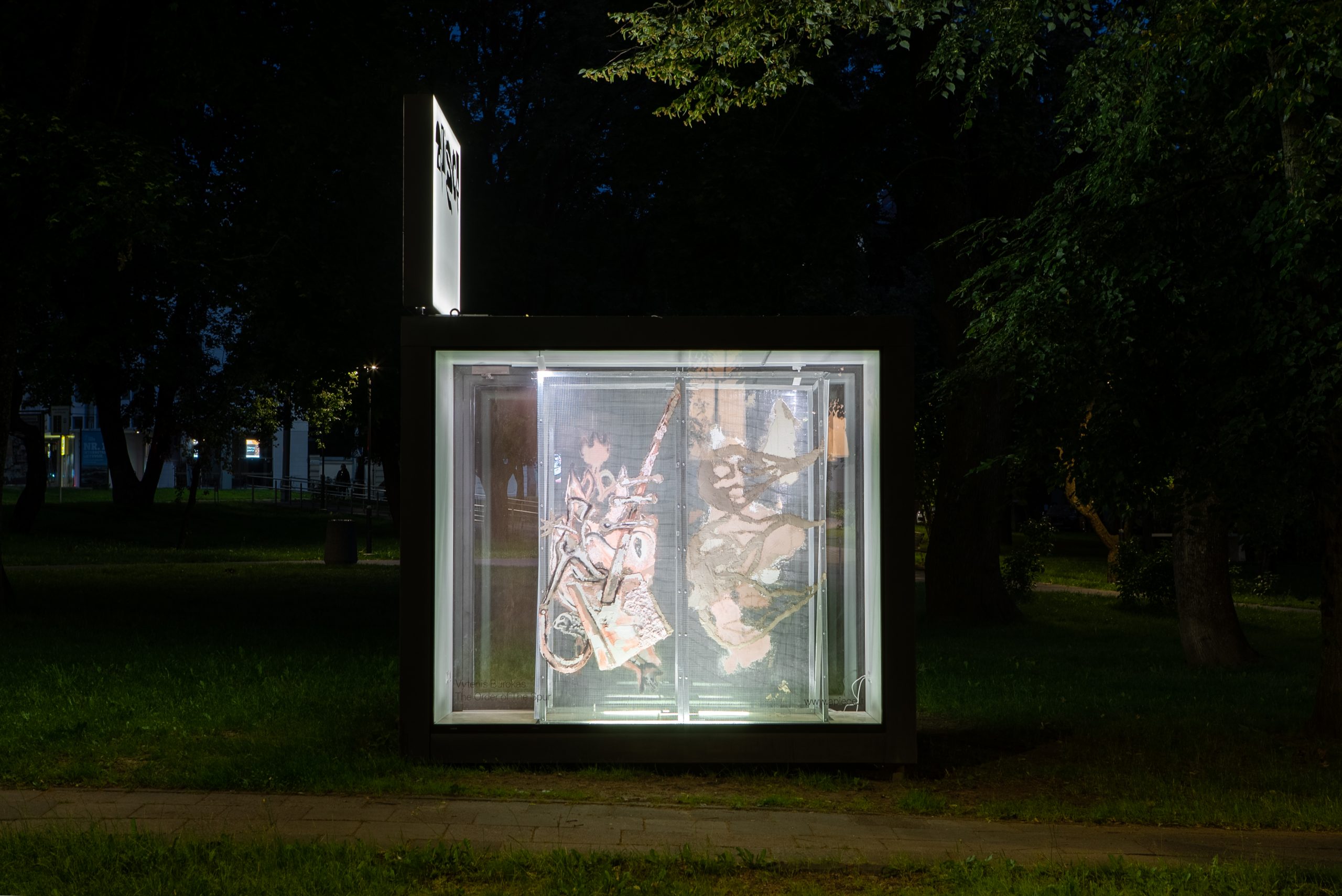 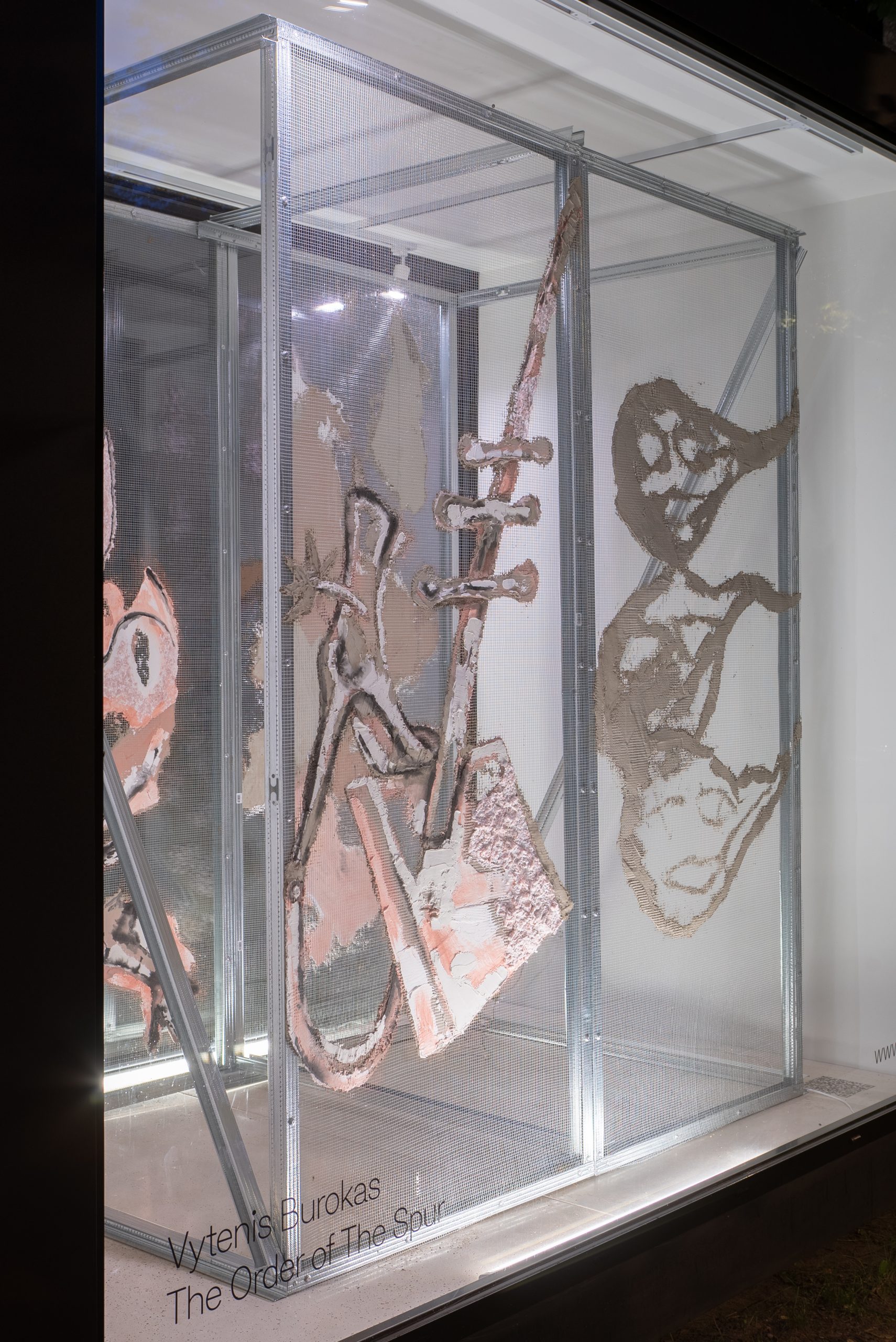 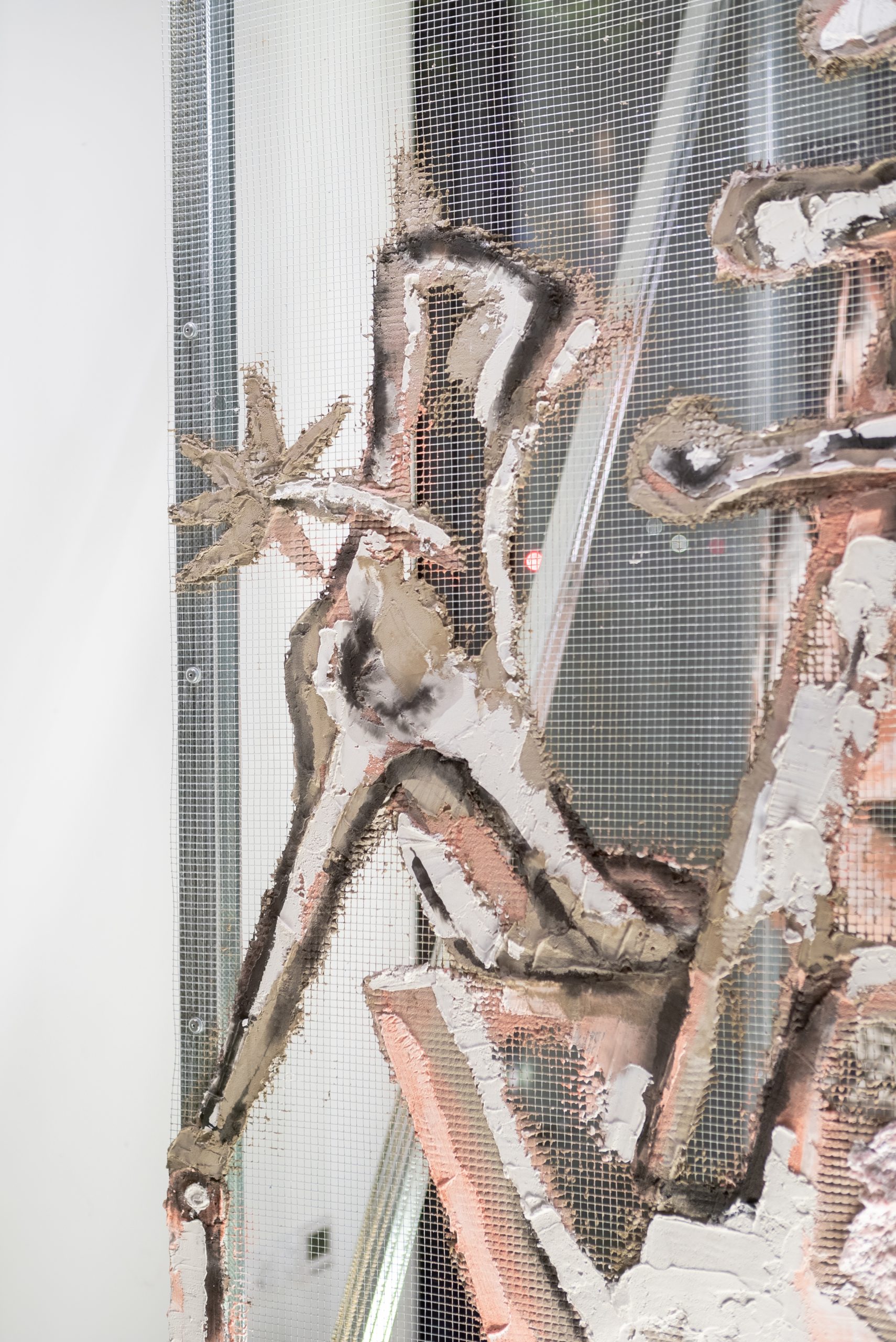 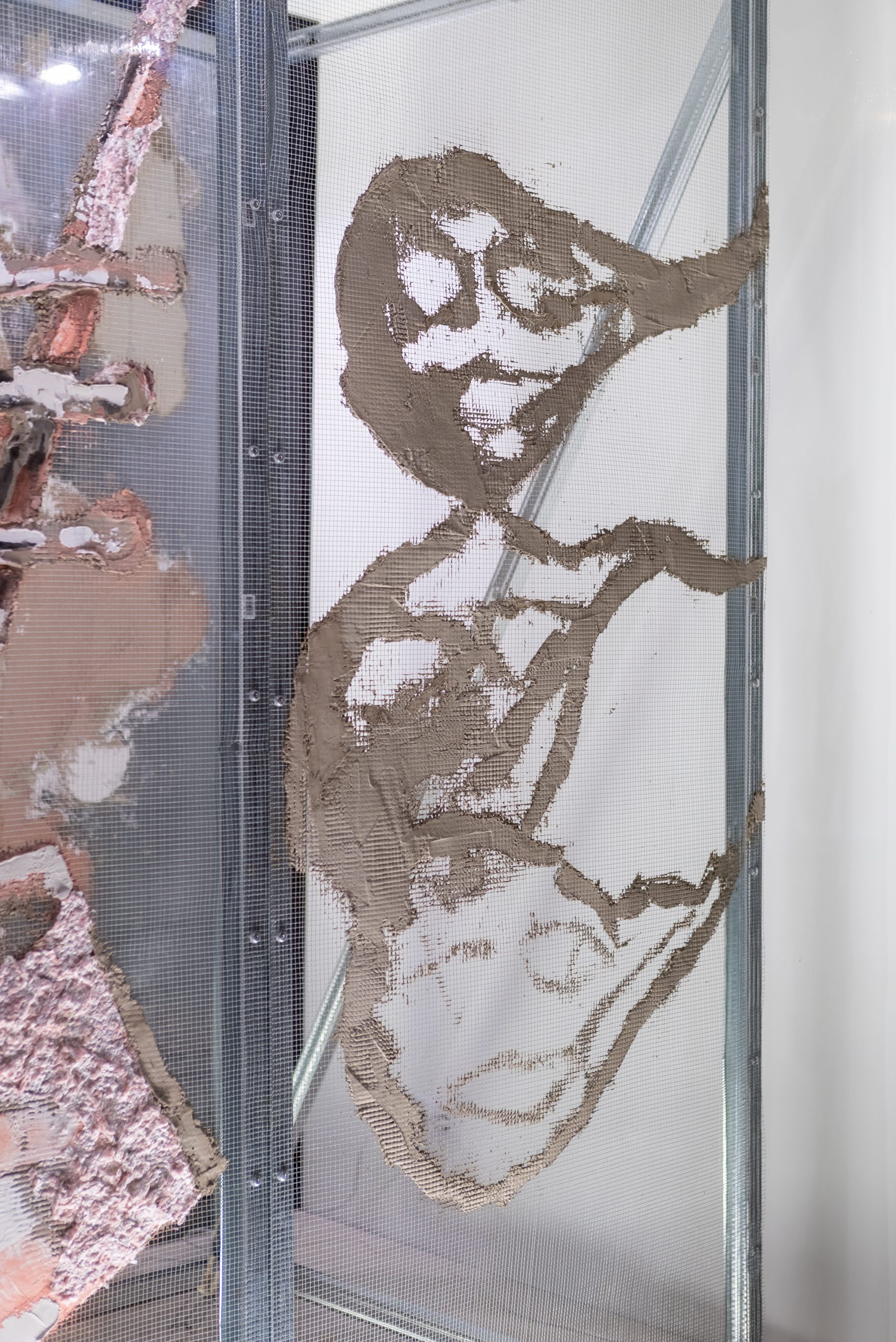 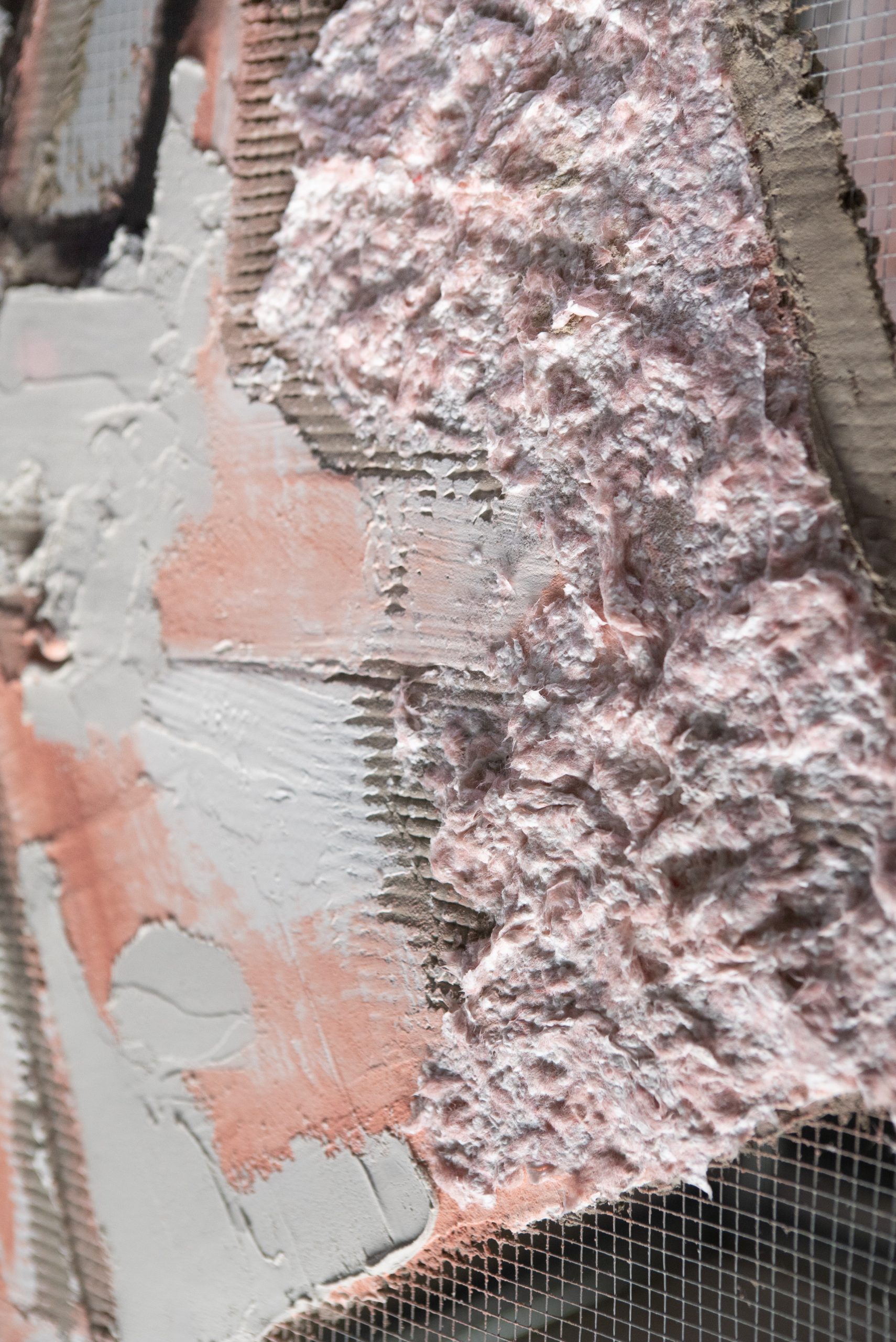 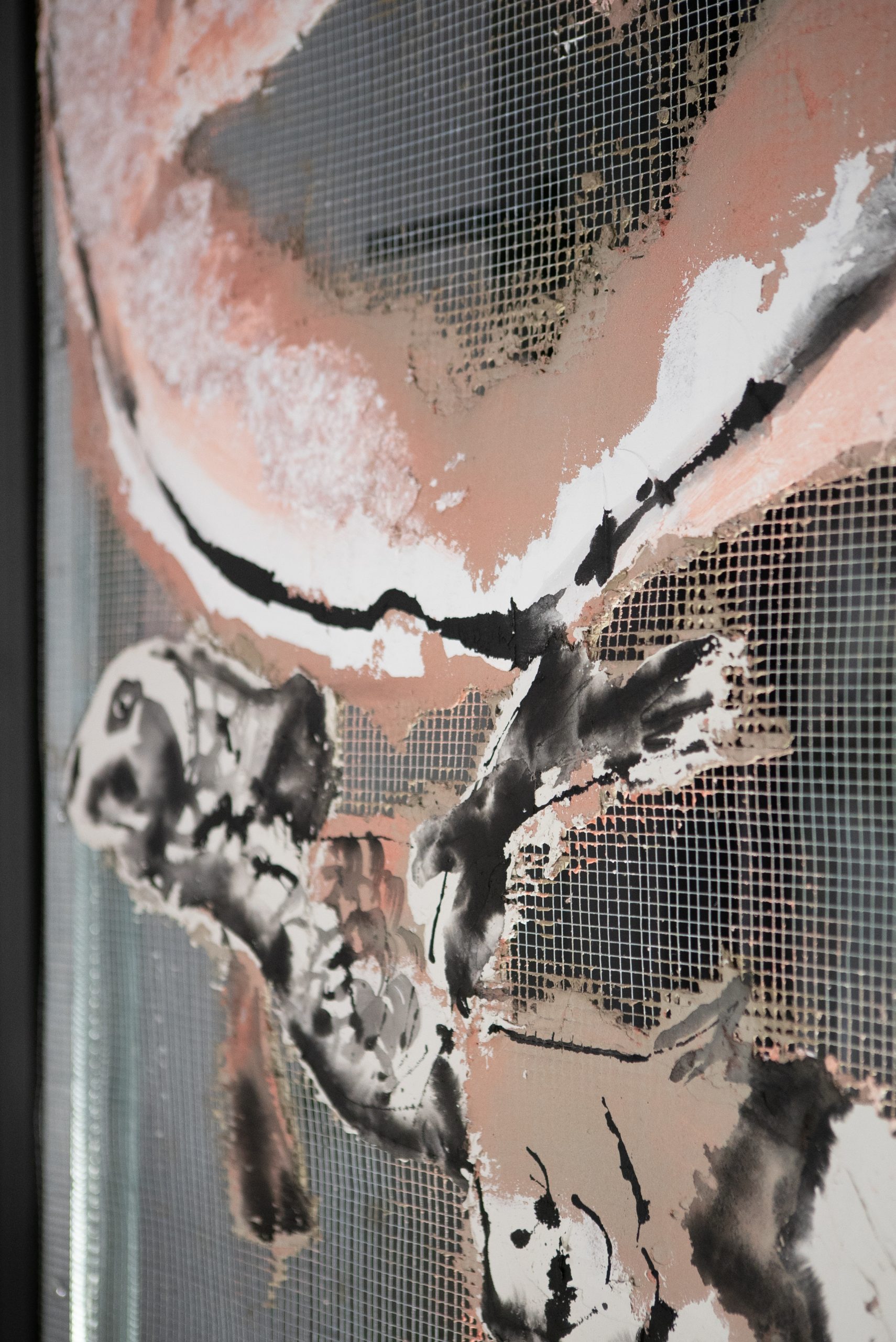 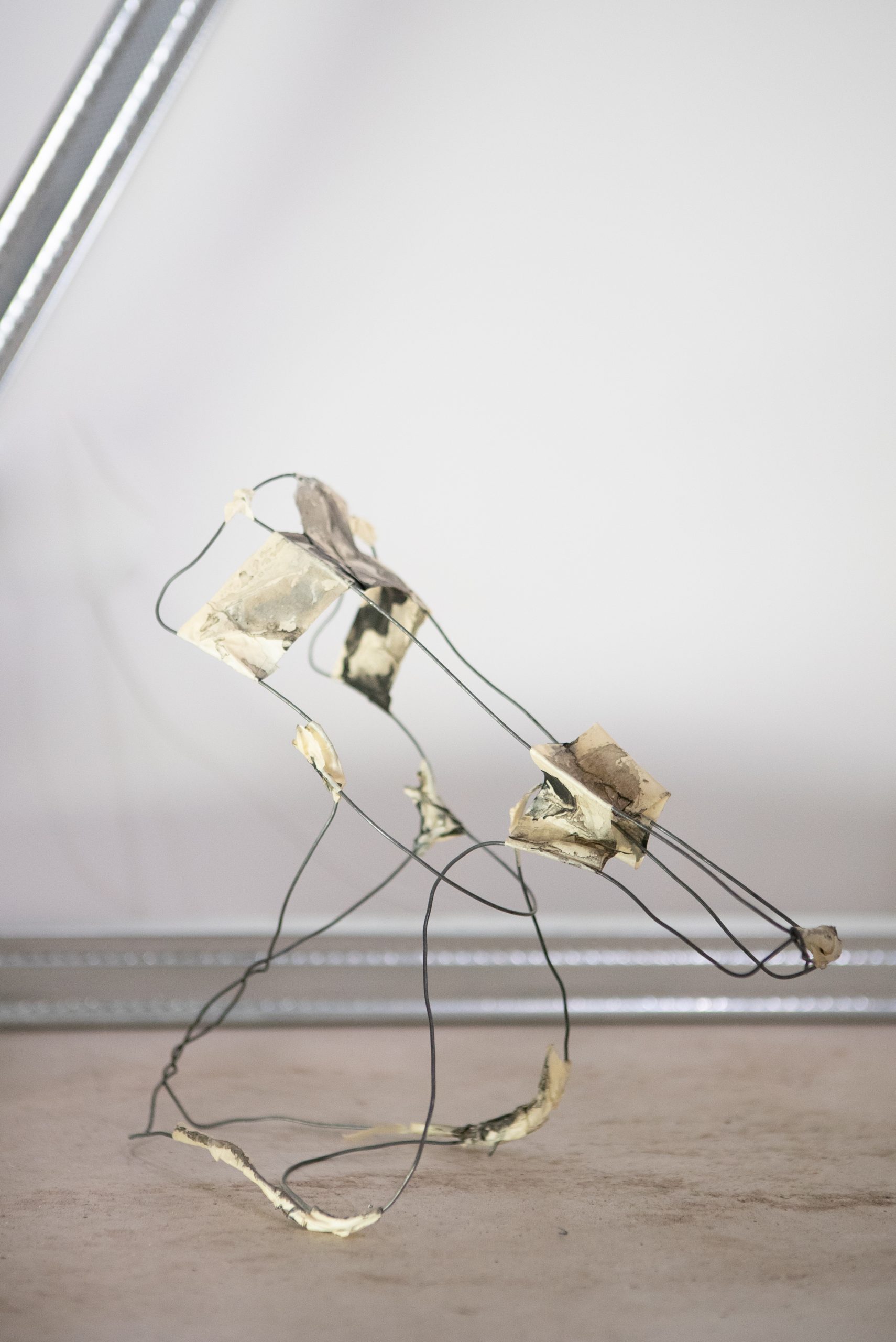 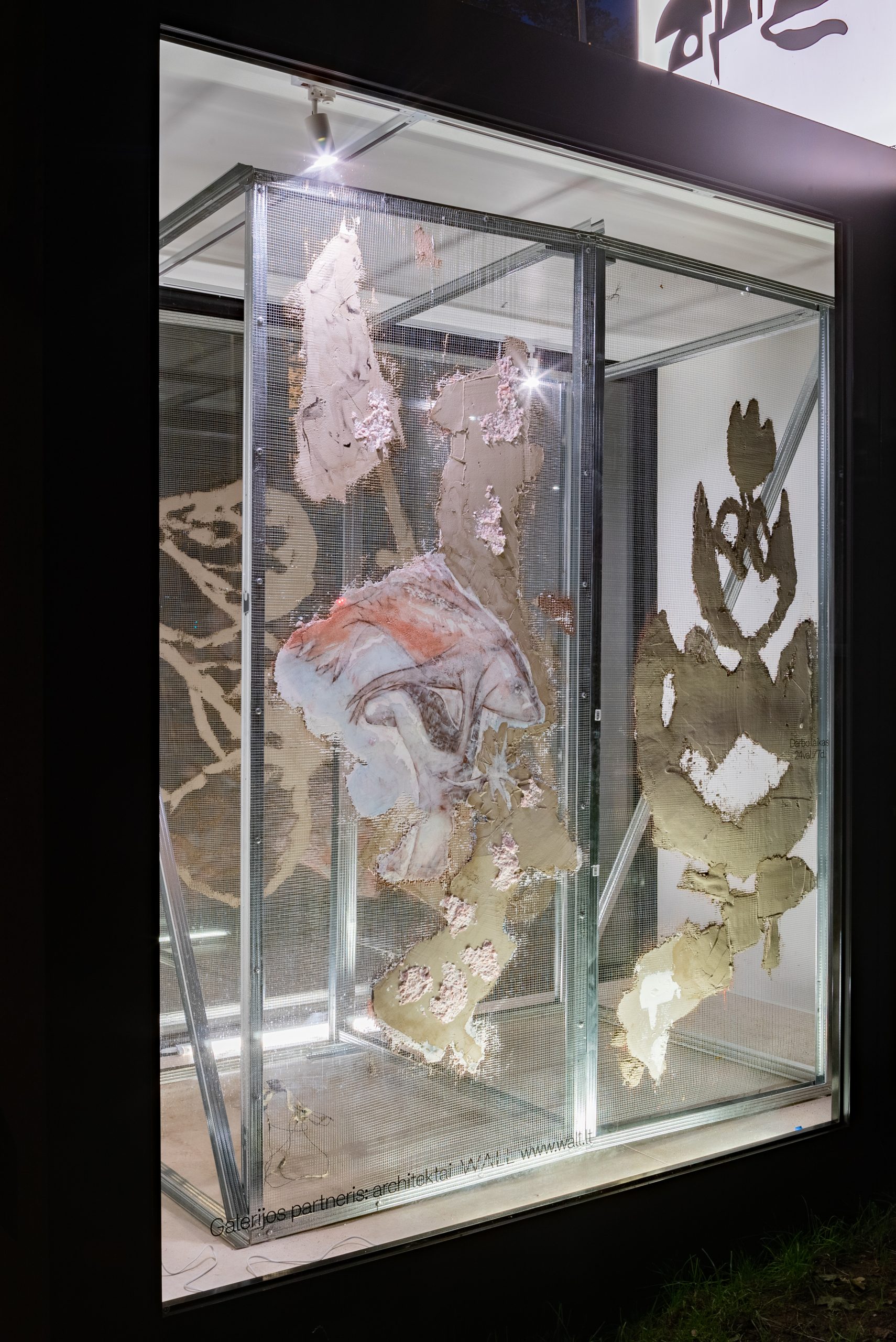 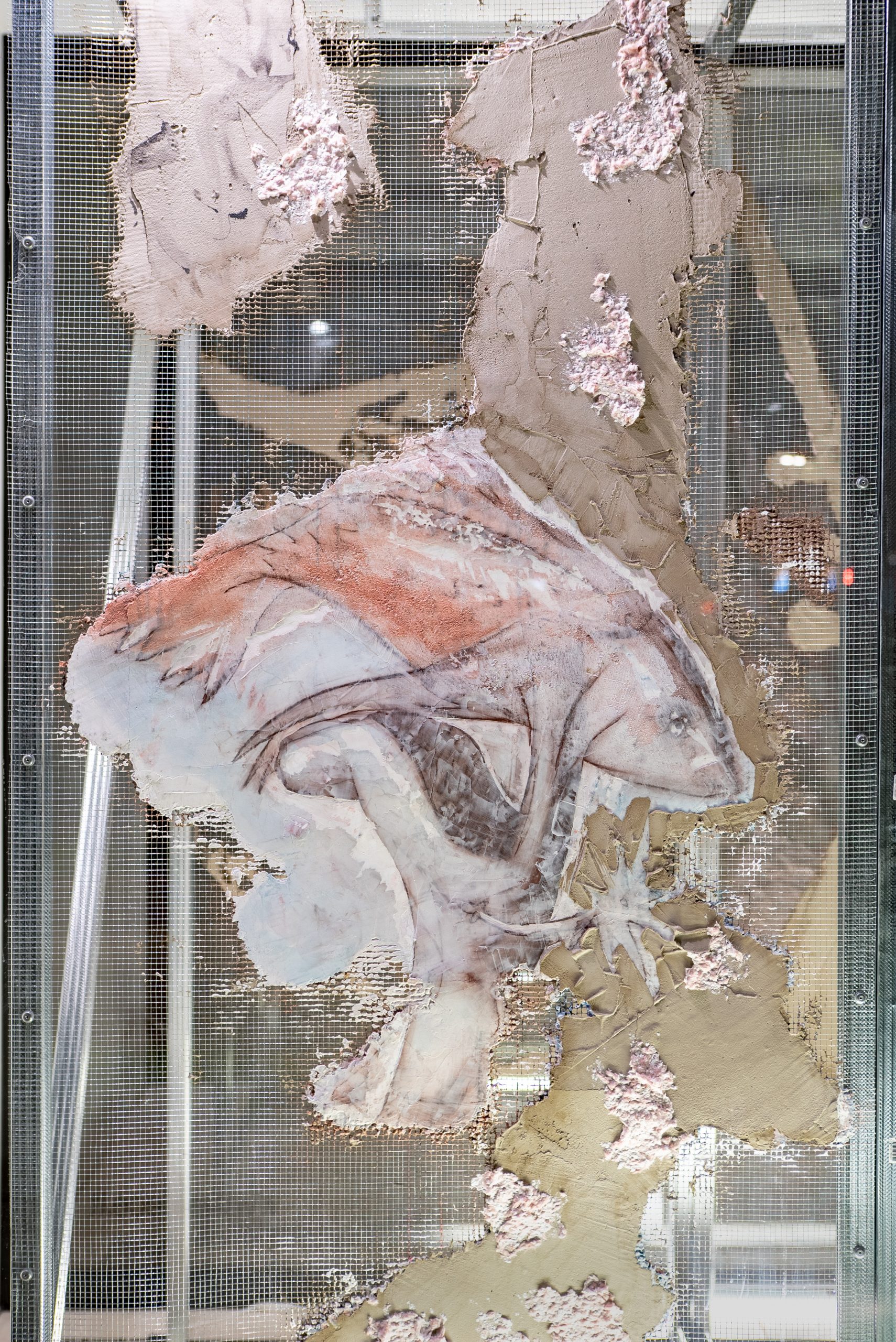 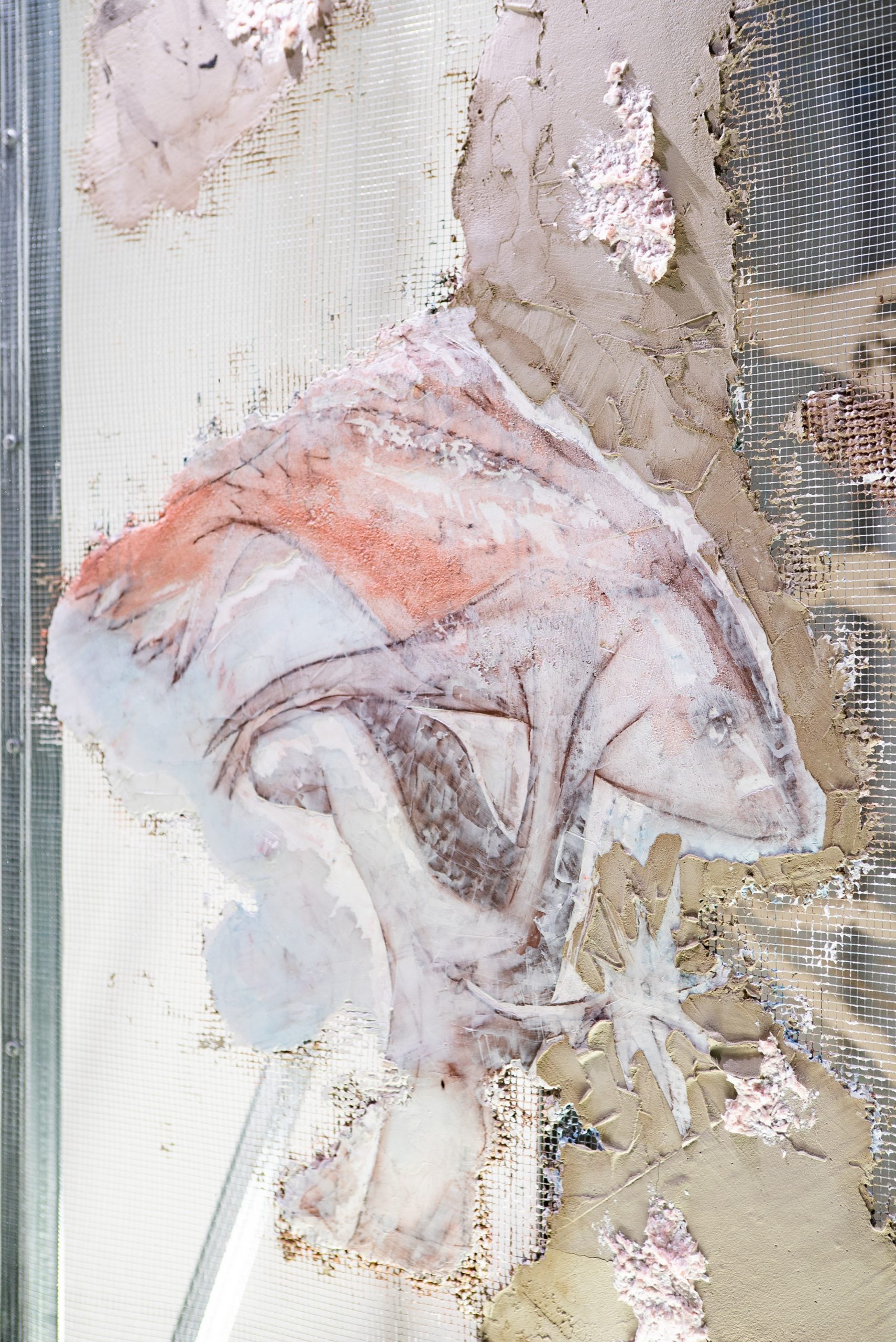 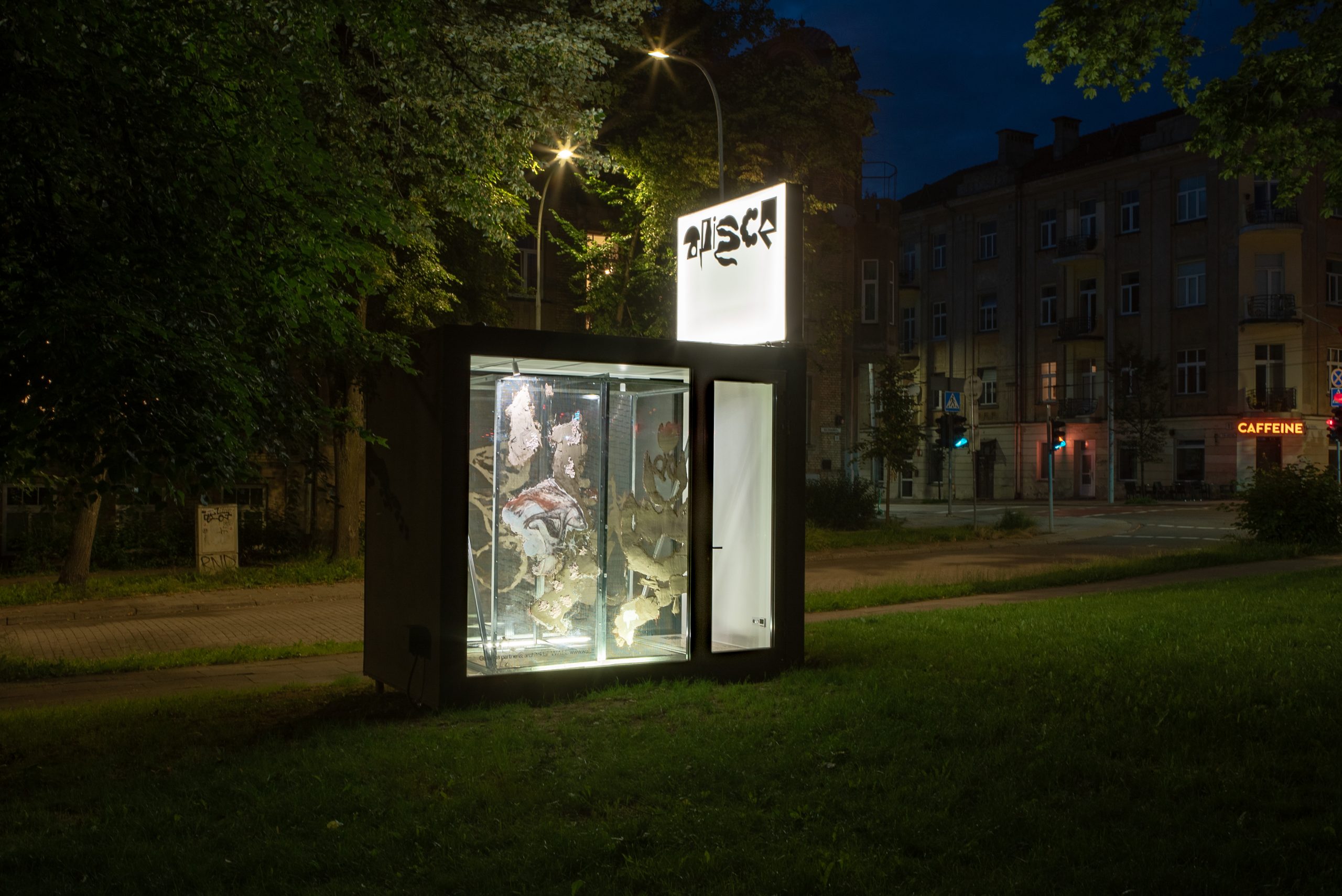 apiece gallery presents “The Order of The Spur: These Boots Are Made for Walking” – the artwork by Vytenis Burokas.

The layers of the drawings rest on plaster fragments stuck on a folding screen made from a metal net separated by plastic film. In these drawings, Vytenis’ alter-ego characters, living in fictional stories of the secret society “The Order of The Spur”, appear along typical-to-them iconographic motives: bodies in spurred boots, fragments of plants and animals, imaginary musical instruments.

The artwork allusion to a fresco, which in turn holds a pretension to timelessness, contrasts with temporality of the artwork materials, resembling some building construction site, as well as with the very function of a folding screen: to hide, divide, to isolate. The partial transparency of both the base (the plaster and metal net) and the content (the drawings) evokes the impression of ephemerality and the feeling of temporality.

Although the narrative is embodied in the drawings, the construction itself is more than just an underframe: it invites to follow the details, to scrutinize the materials – their characteristics, to project the tools used for the construction and gestures made by the constructor while “plastering”.

In other words, the artwork manifests itself not only as a visual image, but also as a text to be read in terms of contemporary art language; or embodies the metaphor of a rider in spurred boots, yet with no horse.

Vytenis Burokas (1990) is an artist, a curator, and a lecturer. His field of interest includes the history of arts and culture, everyday rituals, social roles, and the change of the mind-set due to progressing knowledge about our world. The author has been graduated from Vilnius Academy of Arts, obtaining a bachelor’s and master’s degrees in contemporary sculpture, as well as finishing art pedagogy studies. In 2013-2014 he also took part in an educational program at Rupertas. Works by the artist have been exhibited or performed in Lithuania and abroad.

Communication of the exhibition: Menų Komunikacija.

The exhibition is partly funded by Vilnius City Municipality.